My name is Suzanne and I watch wrestling.

This addictive problem has become so evilly entrenched in my life that I attended a WWE live event at the Charleston Civic Center last weekend. 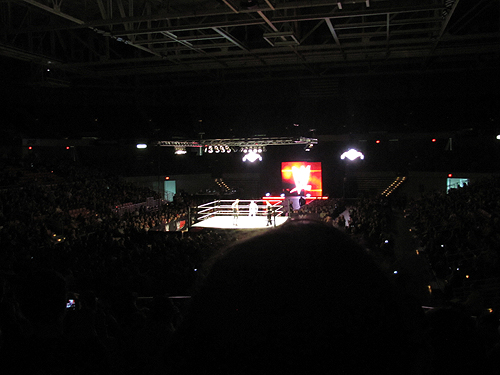 Wrestling (or “wrasslin'” as it’s better known in redneck terms) is perhaps the most ridiculous pseudo sport on the face of the earth. After all, watching grown men in tights, capes, superhero masks, and other silly get-ups that normal people over the age of five wouldn’t wear in public engage in mostly scripted matches is a mind-degenerating waste of time. Or is it?

I’d never watched a single episode of WWE Monday Night Raw until about a year ago, and my preconceived notion was that it was fake, stupid, and completely without merit. And of course it is fake, mostly. It’s not a sport, it’s a soap opera. The stars are athletes, but they work as actors. The main moves are scripted, the match length is planned, and the outcome is predetermined.

This is never more obvious than when attending a WWE live event and watching a “title match” in person. 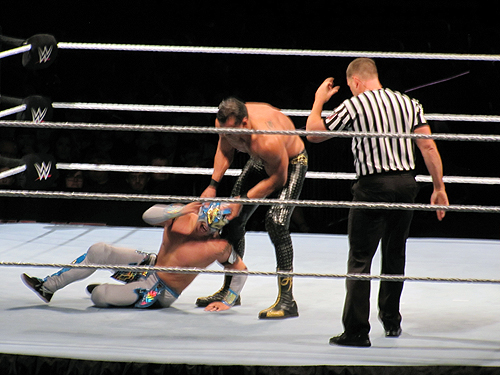 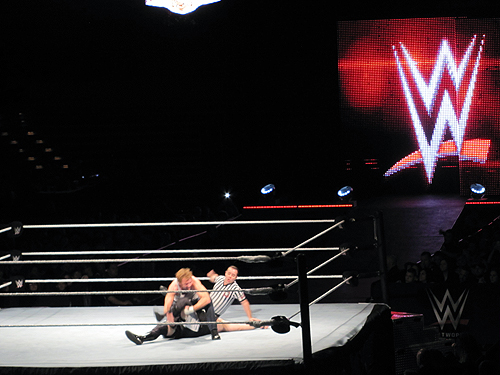 Me: “Alberto del Rio is going to win. And so is Dean Ambrose.”

HELLO. They aren’t going to allow a title to change hands in a non-televised event in tiny Charleston, West Virginia.

Head locks, by the way, are rest periods for the actors. 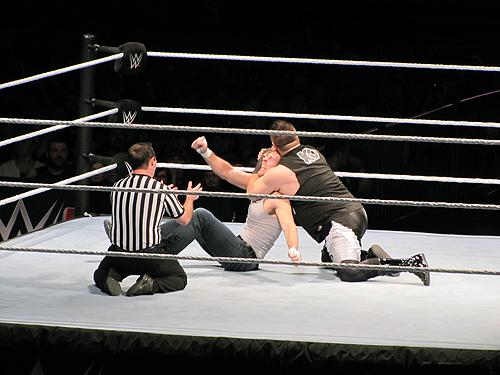 When they’re both “laid out flat”–this is also a rest period. 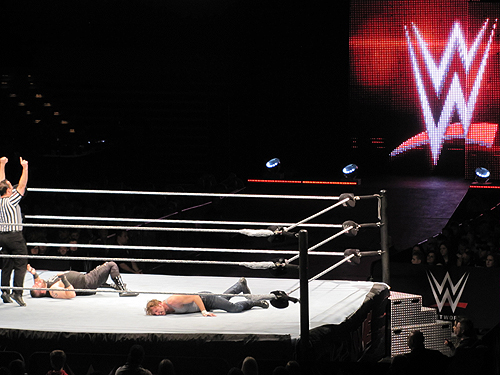 So what is real, since I say it’s only “mostly” fake? It’s real that these are physically demanding events, which is why most matches don’t last more than about 15 minutes. They are also frequently, willingly, slammed flat on their backs, and take other insane risks with their bodies. Which has got to be hard on their bodies, but the ring is more cushioned than it appears. (It’s also much smaller than it appears.) And it’s real that they throw ladders, chairs, and tables at each other–though if you see those tables in person, they’re pretty flimsy. Which doesn’t negate the fact that it’s uncomfortable to have even a flimsy table broken over your head. (I wouldn’t like it.)

It’s also real that these men (and the women who also fight, known as “divas”) work about 300 days a year, flying from city to city (coliseum to coliseum) like a traveling circus. The matches are live performance art, with no retakes, and a very real and unpredictable element of danger because they can, and do, sometimes end up outside the script and get injured.

But, mostly, things go according to plan. There are heroes and villains. Sometimes the bad guys win–because the good guy needs to fight his way back to the top, and he can’t be fighting his way to the top if he doesn’t lose a big match when the producers decide it’s time in the story. Every actor in the show has a storyline, a storyline that stretches for years and is played out every Monday night on Raw and every Thursday night on Smackdown and through the periodic pay-per-views on the WWE Network. 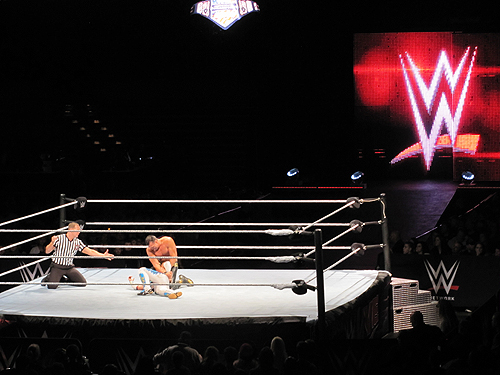 The first time I was watching an episode of Smackdown and nearly jumped out of my seat, I was shocked to realize I actually cared who won the match. Despite the fact that it was fake. They’d finally sucked me into the story to the point of rooting for and against the characters, getting me to loathe Sheamus, love/hate Seth Rollins, adore John Cena, and, ultimately, fall in love with Roman Reigns.

Me ‘n’ Roman are getting married next week.

Unfortunately, Roman Reigns wasn’t at the Charleston event. He’s the current heavyweight champ and they’re saving him up for the Royal Rumble pay-per-view this Sunday in which he has to face 29 challengers in his current ongoing rebel vs the authority storyline.

One of the interesting things to me about the WWE franchise is how the owners of the WWE empire insert themselves into the storyline also, engaging the stars, and voluntarily making villains of themselves. (They comfort themselves on the way to the bank, I’m sure. As an aside, this is one of the smartest businesses I’ve ever seen.) Their insertions in the storylines are fake as well, of course, so why does anyone care? Roman Reigns is a character no more real than Luke Skywalker, and the franchise owners are nothing more than Darth Vaders in business suits. But…. Fans care for the same reason anyone cared about what happened to Luke Skywalker and Darth Vader, which is the fundamental answer to its phenomenal popularity. Criticism of “wrasslin'” for being fake is like criticizing a movie for following the script, and people enjoy it for the same reason they enjoy books, television, movies, and other forms of entertainment. As with any fictional entertainment, a voluntary “suspension of disbelief” in the midst of watching it contributes to the enjoyment factor. This doesn’t make the person watching it stupid–it makes them capable of being entertained.

And so, having begun my “wrasslin’ fan” journey as a sacrificial snuggling event in which I would sit by my honey’s side while he enjoyed his favorite show, I experienced my own preconceived snobbery shattered by the surprisingly powerful creative genius of stories told with acrobatic body slams and hot guys in underwear.

This left me with the only reasonable criticism, which is that pro wrestling glorifies violence. As does Bonanza and Bugs Bunny. But. Parents, change the channel if you’re concerned. Normal, stable adults understand that wrestling is fake (ergo the constant derision of its cheesy fakeness), so this criticism mostly falls on its own sword of contradiction. 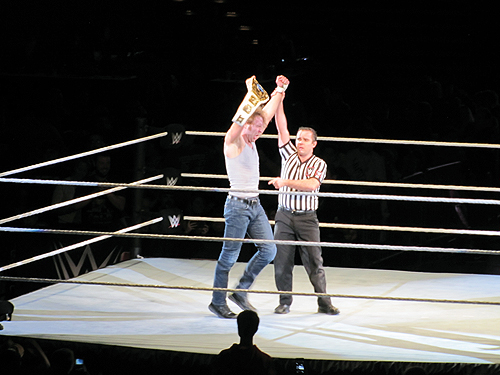 However, just in case, I’m not letting the roosters watch it.