My book is due today. I’m still writing it. After all, it’s Sunday. My editor is home doing the New York Times crossword and eating croissants. (I don’t really know that. I just imagine that’s what editors do on Sundays. Then they take a walk in Central Park with their little dog, buy a fruit glace, and reread Madame Bovary. Or something. I don’t really know. I just know they’re not at the office waiting for my book file to arrive in their email box.) So I will finish my book by the end of the day and email the file to my editor before midnight so the email is dated June 1st and I will still officially make my deadline. Nothing like pushing things till the last minute.

Then I will get up tomorrow and hit the garden like a hoein’ fool.

Or not. But I may start unpacking some of the many boxes sitting around here and finish settling into the house. And decide whether I want to learn to make soap or candles first. And go outside once an hour, lift my face to the sky, and shout, FREE AT LAST, FREE AT LAST, THANK GOD ALMIGHTY, I’M FREE AT LAST.

I’m also actually teaching an online writing workshop that starts today, too, but I hope they are also doing the New York Times crossword and walking their dog in Central Park because I don’t have enough brain cells for that. (And if you are signed up for my class and you’re reading this, I’m just kidding. I’m so prepared. I’ll be right there.)

In the meantime, the last days and hours of finishing a book are exhausting and mind-numbing. Yesterday, after I tore some hair out, whimpered, stared at the ceiling in despair crying, GOD, WHY ME, then wrote 10 pages (because, you know, the book, She Is Not Done), I decided since I was being Superwoman and all, I’d make dinner. For the past four days, my kids have been eating turkey sandwiches and chili after I took a day off last week to cook a massive amount of help-yourself food in preparation for these final harrowing days. The turkey’s almost gone and the chili is history, and everyone is tired of turkey and chili anyway. So I went for something simple, something easy, something my depleted brain cells could handle–spaghetti sauce from a jar (hey, it’s not more turkey sandwiches or chili) and one of my dear old friend recipes, French bread. I made the dough. It was all fixed, nice ball of prepared dough, ready to go into the oiled bowl to rise. I was feeling quite proud, in my suicidal I-have-24-hours-to-finish-this-book way.

Then my little depleted brain noticed the package of yeast sitting on the counter. You know, the package of yeast that was supposed to go into the dough. Like, at the beginning. I had a completely mixed, kneaded, prepared ball of dough ready to set in the bowl to rise. And there was no yeast in it. That is the brain power of a writer in the final throes of a book. (Thank God I used spaghetti sauce from a jar or no telling what would have happened to that.)

Desperately, I grabbed the package of yeast, cut it open, dumped it on the ball of dough, and started kneading. And flipping out and asking myself if I’d gone insane. The yeast looked grainy in the dough. Not mixing in. Not gonna happen and it was ridiculous anyway. You can’t add yeast when the dough is already made. Disaster. Stupid. This dinner was supposed to be simple, easy! I can’t make another ball of dough! I can’t, I can’t!

So I stuck the bowl on top of the toaster and made another ball of dough because of course I can despite feeling quite frustrated and tired and suicidal. (The final hours of finishing a book are Very Dramatic.) The second ball of dough rose quite nicely, in spite of the fact that I rushed the dough in my frustration and didn’t add enough flour, and I stuck it in the oven. I took it out, set it on a baking rack to cool, and decided it was time to throw out that crappy ball of dough that hadn’t risen because I’d tried to put the yeast in it after the fact. Just as I was about to throw it out, I realized, well, it had risen a little bit….. In its pathetic, this-is-so-not-right way. 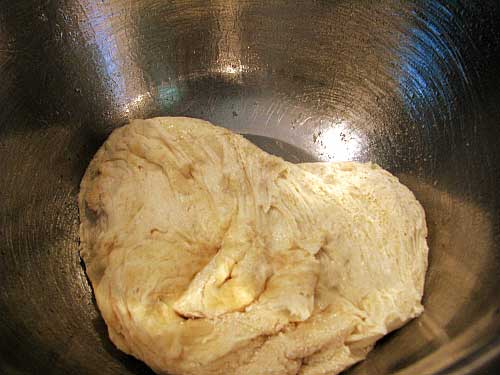 And I could see the yeast, not grainy anymore, but activated, bits of sort of pebbling on the outside of the loaf, which meant the bits that had gotten inside were probably okay, too. And I HATE TO WASTE STUFF. And I’d gone this far…. So I kneaded it for a bit, shaped up a loaf, and….

I stuck it in the oven.

Here are my two loaves of bread. Neither loaf is anything to write home about, but can you tell which loaf is the one I screwed up, the one that no way in the world should have actually ended up making a legitimate loaf of bread, and which is the second properly made loaf (albeit, not with enough flour so the dough was sticking to my hands as I shaped the loaf)? 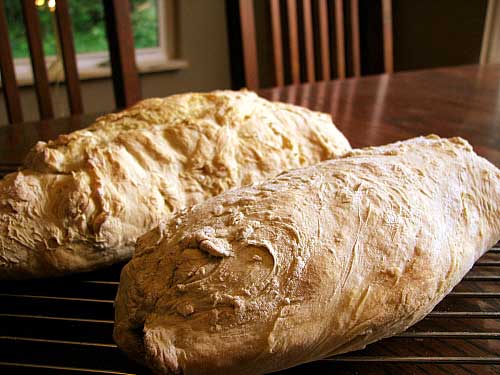 The one on the right is the loaf from the dough I screwed up. Yes, now we know, you can add the yeast AFTER the fact. I don’t recommend it, but…. I sliced it and it was just fine, tasted fine, looked fine. In fact, looked better than the second loaf I made in my near-sobbing drama.

As Georgia says, “You can’t ever tell.”

Georgia would also tell you to never throw anything out, but that is another story and should absolutely include pictures of the inside of her barn.