The past few weeks have been stressful but exciting. Moving an entire farm on the brink of winter is less than ideal. Winter preparations were interrupted by moving preparations, and the change of location has an impact on how those previous preparations work. Round bales don’t work for me at Sassafras Farm. I don’t have a tractor here right now, and I can’t handle round bales. I can’t move them around on my own, which is a serious problem. But, these round bales were already purchased, so using them is a necessity. 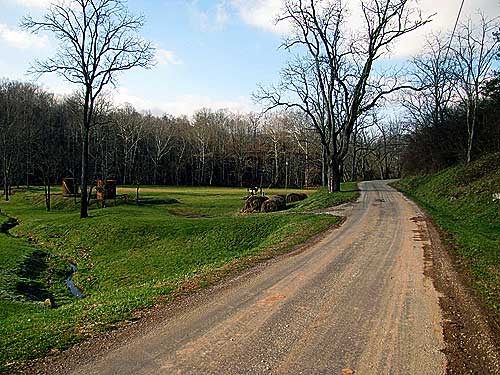 The round bales were on the property of a Stringtown neighbor across the river from our farm. He allowed the bales to sit on his property until I could get them. In order to get them, I had to align the correct weather, somebody with a tractor and a hay spear to lift the bales, and a trailer to haul the bales. I also had to do some Stringtown politickin’. Stringtown politics are delicate. There are approximately eight or nine property owners in Stringtown. Who is speaking to who at any given time is variable. I must brag and say that I am and always have been on speaking terms with all of them. This is not all that simple other than for the fact that I adore all of them. (Even the Ornery Angel.) However, at times when one must interact in such a way that brings together opposing parties, some extra effort is involved.

The neighbor who had the bales sitting on his property and the neighbor with the tractor and hay spear to move the bales are not on speaking terms with each other.

There’s not much that can’t be solved with a loaf of homemade bread. First Ed moved the bales around some with the claw. 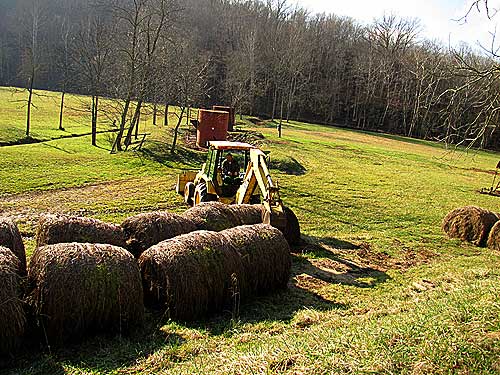 Then he poked one with the spear. 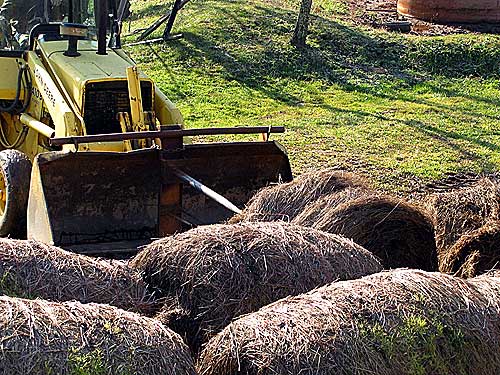 Round bales are wrapped tightly and can be picked up easily with the spear. 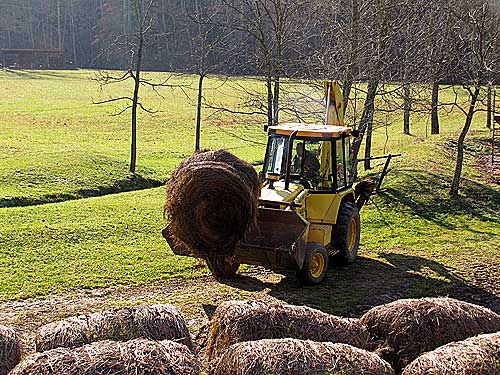 He brought each bale up to the enormous trailer and loaded it on. 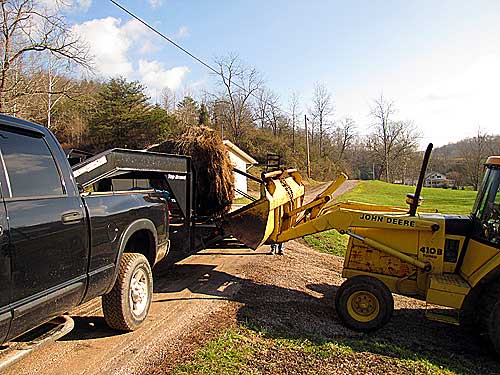 The trailer was so much bigger than I expected. 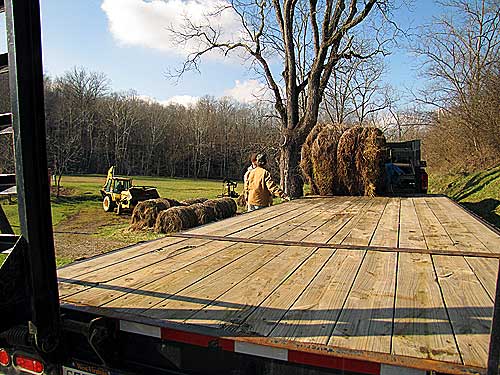 When he brought the second bale on each row, he’d just push over the first one. 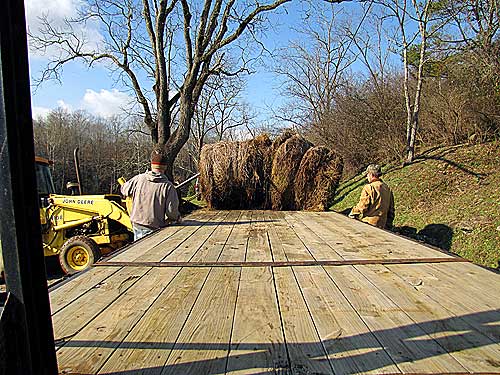 The trailer commander, Lonnie (who also moved the cows, sheep, and donkeys in his livestock trailer for me) and one of his big, strong grandsons oversaw the packing on of the bales as Ed brought them up on the tractor. 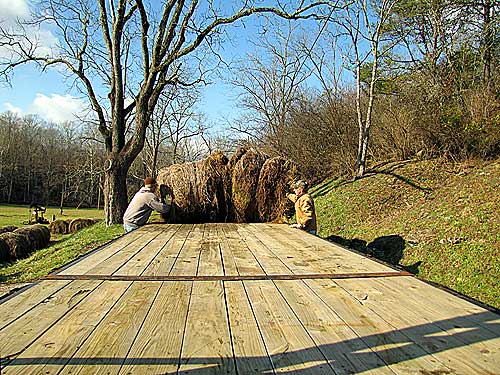 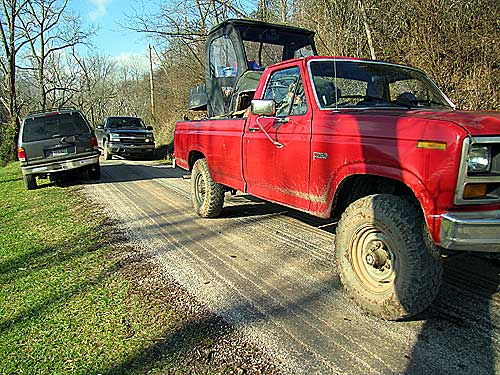 The trailer had to back up and let the traffic tie-up go by. 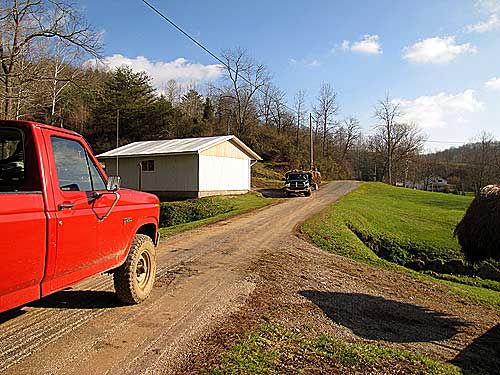 All you have to do to generate traffic on an otherwise deserted country road is begin working. 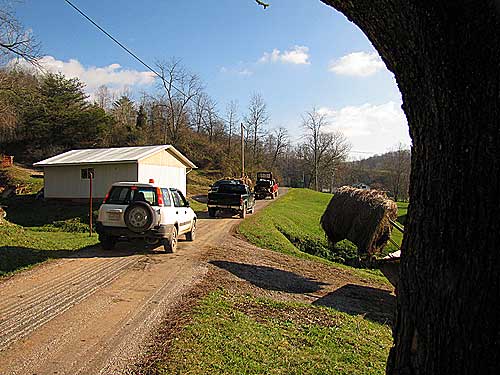 As bale after bale was loaded on the trailer, I was shocked by how many bales were going on there. I started out the day thinking I was going to move maybe four to six round bales. 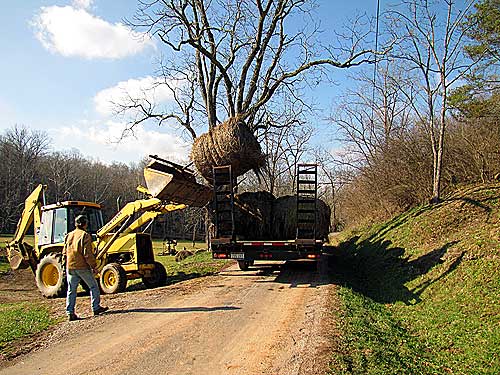 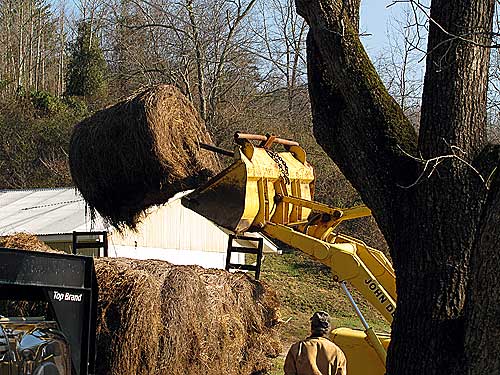 They got twelve on the bottom, five on top. 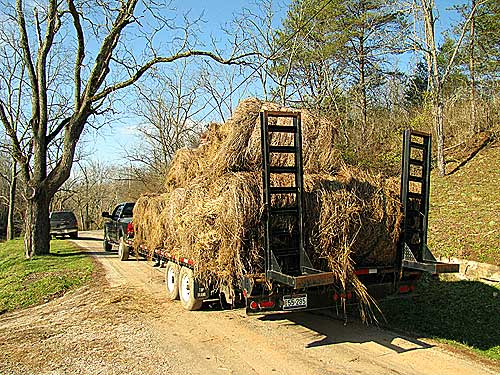 I was impressed. And slightly enamored with large equipment 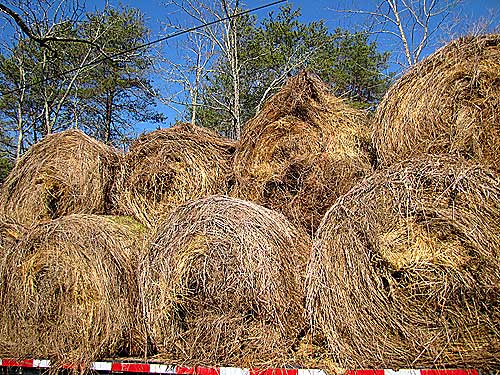 They strapped everything down tight. 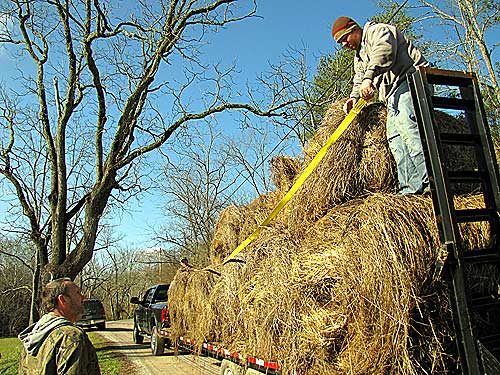 And I fell deeper and deeper in love with large equipment. 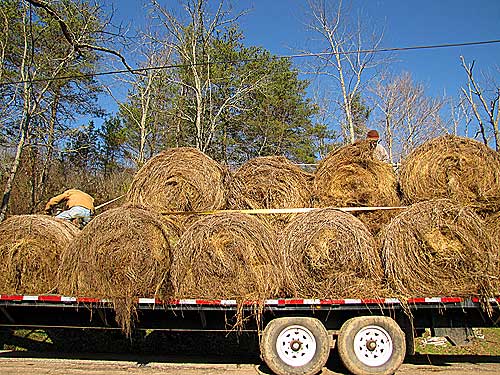 And then off they went to Sassafras Farm. 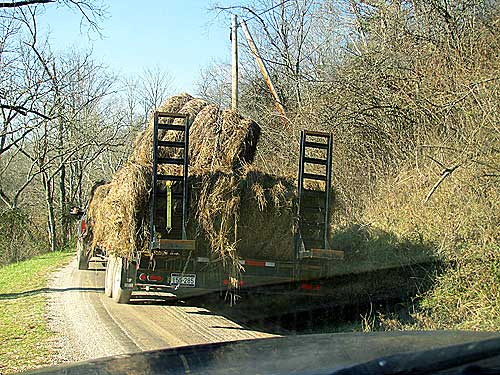 The real adventure began when they stopped by the road while I showed them my idea of the best place to deliver the round bales at Sassafras Farm. I had spent the past week or more deliberating on this mission. It’s wet here, WET. I finally came up with a plan to have the trailer back in to the far gate at the back of the barn yard and drop the bales there. It’s the most dry approach. There’s a slight tilt to the land, and Lonnie was worried that the t-bar on the trailer wouldn’t like that, so they tried to back in to the front of the barn yard.

New neighbor friend Andy happened to stop by and had to pull them out with his truck and a chain. 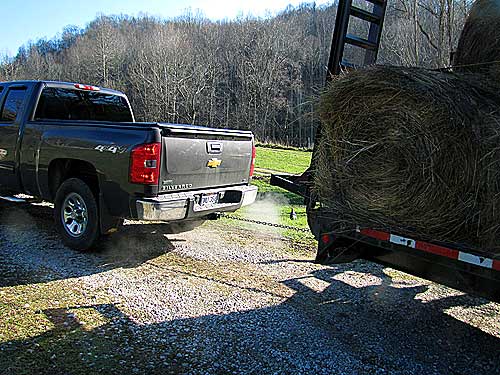 After which they decided to give my idea a whirl after all. 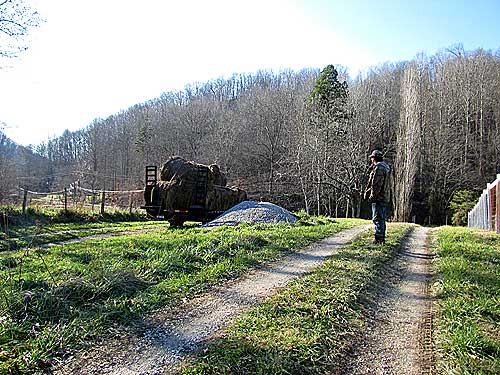 And it worked perfectly! 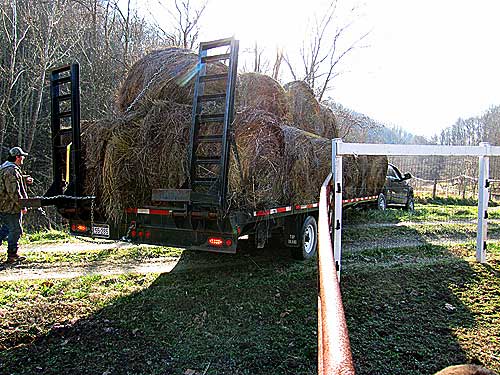 I really love being my own little farm planner, and I especially love when my plans work. 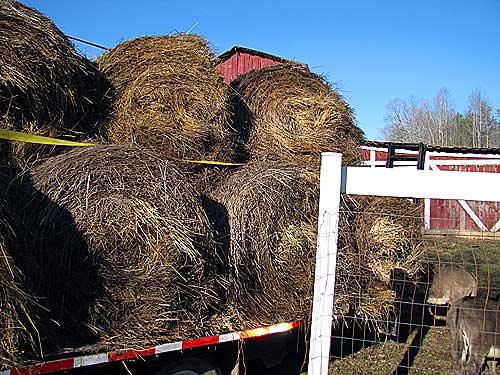 Everybody was curious about the unexpected arrival in the barn yard. 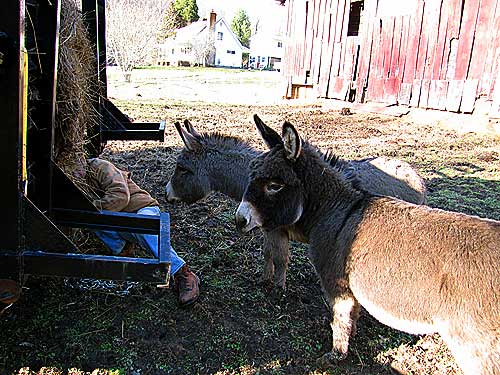 And no sense waiting for the bales to get off the trailer before starting to eat. 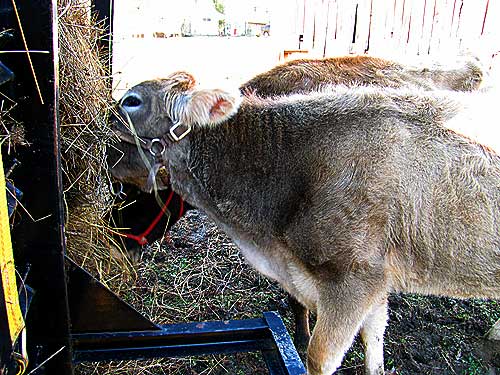 These round bales will remain where they were dropped. I have no ability to move them. Seventeen round bales are enough to feed my two cows for four months. However, due to the exposure of the round bales in this situation, the cows are likely to move from bale to bale, and there will be more waste than usual. This is NOT ideal. Moving to a new farm on the brink of winter is not ideal in general. I’m going to do the best I can under the circumstances this year, and prepare better next year.

Lonnie and his grandson moved the bales around the best they could to at least make some semblance of organization, and to make room to keep dropping bales off the trailer. At one point, Lonnie asked me if I had a hay hook. I said, “I don’t know. Want to look in the barn?” And next thing you know he was digging around the barn and came up with a hay hook. There are so many things in the barn that were left here, and I have no idea what they are until someone picks it up and tells me. I think if I sent someone in there looking for a troupe of Vegas showgirls and a Japanese submarine, they would find that, too. 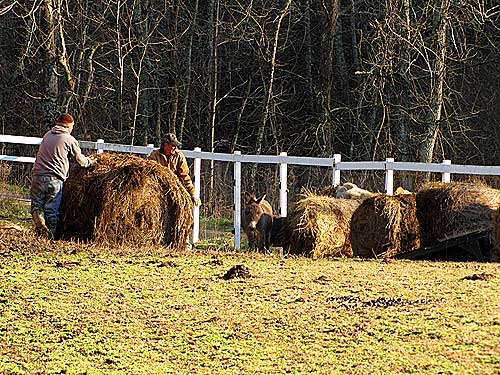 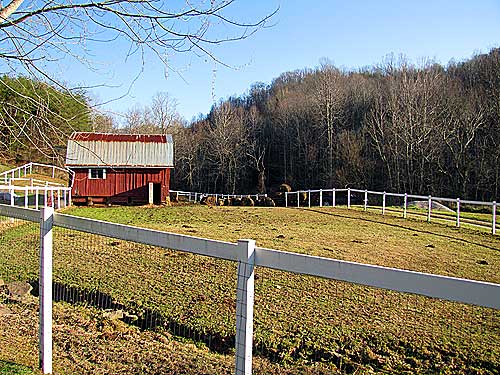 I have round bales!