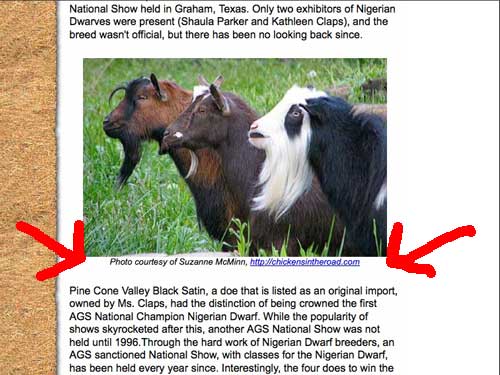 Late yesterday, I received a phone call from Dave Belanger. He finally admitted this was my photo and apologized to me for stealing the photo and publishing it in the print and online edition of the November/December 2010 Dairy Goat Journal. (He also apologized for hanging up on me yesterday morning.) He agreed to print a correction and credit in the next edition of Dairy Goat Journal. He also agreed to reinstate the photo in the online edition with my credit and link as the only connection to the printed edition, which can never include my credit as it is already in circulation. (I believe he had actually done that before he called me.) He asked me for my price for the photo.

I explained to him that my price was $350 per use (print and internet), tripled for the unauthorized and uncredited use. That is a total of $2100. (As outlined in my Open Letter to Dave Belanger.)

I explained to him that I was actually asking for a rather average base fee, but there were additional charges for the unauthorized and uncredited use. Countryside Publications stole my right to place a value on my work before distributing it. They also stole my right to determine whether or not Countryside Publications could even distribute it at all. If I choose to not sell my work, THAT IS MY CHOICE. And the fact is, I DO NOT SELL MY WORK. I publish it here, on my website. THAT IS MY CHOICE. They published it without my permission and without my credit.

Ten years from now, people will still be picking up stacks of old Dairy Goat Journals in thrift stores, opening that article, seeing that picture, and not knowing who took it. The lack of credit in the printed November/December 2010 Dairy Goat Journal can never be corrected.

Countryside Publications is a five million dollar company. He accused me of being opportunistic by asking for an increased fee for the unauthorized and uncredited use.

This is not about money. I may never see the $2100. If I do, it will be a long time from now. If I wanted to make a quick buck, I’d take the $500. (I could use it.) But if I let him not only steal the photo but pay no penalty for it, there’s no reason for him to not steal again. After all, what did it cost him? He can steal photos all he wants and only pay for them (at a price he sets) if he’s caught. Just who is opportunistic? He published my photo without authorization or credit then says, here, take $500 or NOTHING.

I’m going to take Countryside Publications to court. Let a judge decide how much a magazine should pay for a stolen photo, not Dave Belanger. I don’t care about the $500 or the $2100. (If I ever see a penny for that photo, I’ll be amazed.) I care about the arrogance. I’m going to take them to court because I’m tired of people stealing my stuff. I’m going to take them to court because I want them to have a consequence, even if all it will be is the inconvenience of sitting in a courtroom. As writers and photographers, we have to start taking these people to court. They think we won’t. And they won’t stop until they know we will. If I have to go to Wisconsin to sue them, I’ll go to Wisconsin to sue them. (Will have to find someone to milk my cow.) I want them to know that if they do this again, someone WILL SHOW UP.

P.S. He mentioned receiving phone calls and emails from my readers and said he was not concerned about it. He admitted there had also been some subscription cancellations, but that people cancelled subscriptions and started subscriptions every day and that he had no reason to believe any subscription cancellations were related to his treatment of my work. (He also said that sometimes people felt sorry for them and sent them donations. You know, because it is a 5 million dollar operation.) He said, “What’s the name of your website again? Chickens in the yard?” Perhaps it is true that he is NOT reading my blog because if he did, he would know that I report every single thing he says.

P.P.S. By the way, he said the theft occurred while the editor, Jennifer Stultz, was browsing the internet looking for a cover photo. (Man. That is scary. She was cruising the internet looking for a cover photo. Anybody missing a photo of their Nubians? Because she picked one up somewhere.) Along the way, she lifted my photo. (The part between she stole it and they used it was a little fuzzy, but he identified Dairy Goat Journal editor Jennifer Stultz as the one who actually lifted it.)

P.P.P.S. I will update as the situation progresses.

Note: I’m not sure where emails to [email protected] end up. If they end up with Jennifer Stultz, you can bet she’s not passing them all on to Dave. I have never received a response from that email address.

You can call Countryside Publications toll-free at (800) 551-5691 and leave a message for Dave Belanger. I know from experience that this phone number goes to his office, not Jennifer’s. Jennifer Stultz is actually in Kansas.