I am loving having a mother hen with chicks running around the barnyard. There was a time or two back in Stringtown when a hen managed to hatch a chick or two in secret, but the chicks never seemed to make it. They’d be there one day, gone the next. Which made me not want to let them have chicks. It was too sad when the chicks disappeared. This time it’s different. I’m not sure why, but nothing is bothering the chicks and they’re growing.

Here’s how it happened.

We have several game hens. They’re about the size of banties. We have netting over the top of the chicken yard (those game hens can fly like crazy, you can’t build a fence high enough for them), but they manage to push out under the fence, constantly, so several of them have ended up outside the chicken house/yard. (None of the big chickens get out, just the game hens.) They’re feisty devils, those game hens. One of them made a nest in the barn then started sitting on it. Game hens, like banties also, are determined mothers and good sitters. Alas, there are no roosters outside the chicken house, so she was doomed to disappointment. We thought we’d help her out, feeling slightly sorry for her, so one time while she was off the nest to grab a quick drink of water from the creek, we switched out her eggs for eggs from the chicken house. Eventually she hatched five chicks. They were hatched the day before the flood, so they are almost a month old now. She’s been a very good mother and still has all five of her chicks. I decided I like getting chicks this way! They were free, no ordering from a hatchery! I haven’t had to buy any starter for them–she makes sure they get fed! It’s interesting to watch her. She will scratch at the ground, then step aside and let the chicks eat what she’s scratched up.

It’s also so enjoyable to walk into the barnyard and see her strolling around with her babies. It’s adorable. And then there was this sight one recent morning. 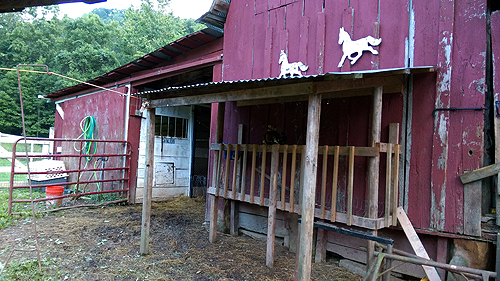 Do you see? Up on the hay feeder. That’s about four feet up off the ground, which is amazing. 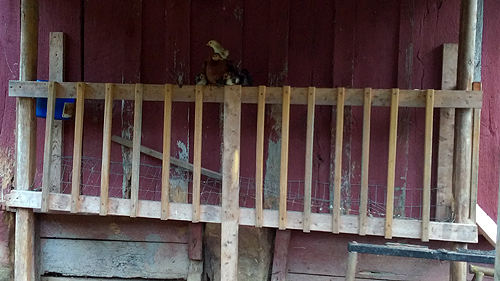 That the game hen could get up there is no surprise. But the chicks? The CHICKS got up there? 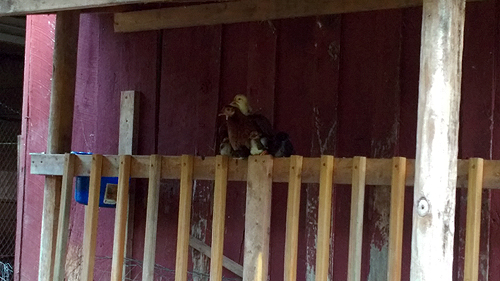 And not ONLY did the chicks get up there with their mama, but one of them is on top of her back! 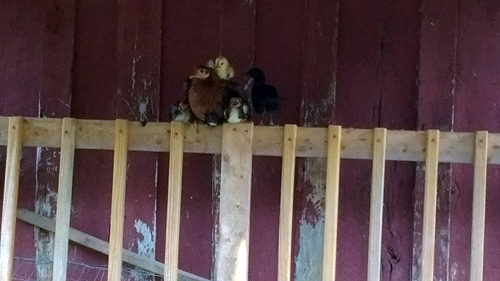 Meanwhile, by the way, another game hen appeared last week with two newborn tiny chicks. Really? We didn’t even know she had a nest! We were ready to call her The Virgin Mary, then I saw her sneaking back under the fence, into the chicken yard to get to the feed, then back out. That’s how she had some fertile eggs, and probably why she had only two that hatched. She’s going in and out of the chicken yard to eat, and occasionally engaging with a rooster, but not all the time, so she only had two fertile eggs. But, she’s quite proud and happy with her two chicks.

And if this doesn’t stop, soon I’ll have 100 chickens.