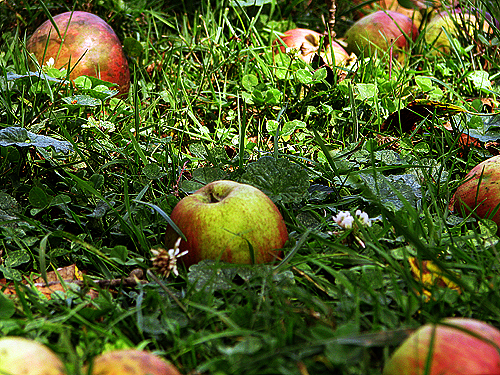 Apple butter in autumn is an Appalachian tradition. Historically, it’s a day-long event. Whole families would join together to simmer apple butter in copper kettles as big as wash tubs. This tradition is largely lost, but you can still find communities coming together over apple butter. The little church in town is making apple butter this weekend, the old-time way, in a copper kettle, and it’ll take all day. But you can make it at home and it’s just as good–minus the copper kettle ambience. I love apple butter. Apple butter is one of the traditions my father brought with him when he left these hills long ago after World War II. I grew up on apple butter and yes, sometimes I thought it was odd. None of my friends had apple butter at their house. But we did. I still love apple butter today, so it’s been fun to learn how to make it. I learned straight from the feet of Georgia, so I figure mine’s as traditional as it gets without getting out a copper kettle, though of course I couldn’t resist playing around with the recipe a bit. 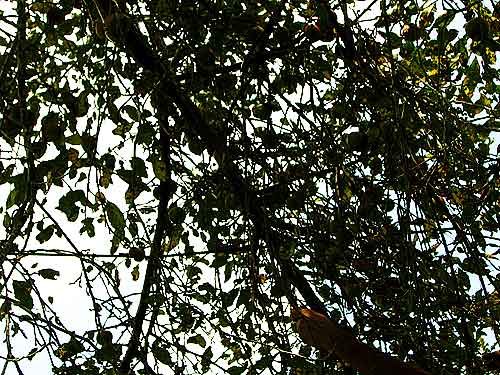 I would tell you how many apples hit me on the head, but that would be embarrassing. 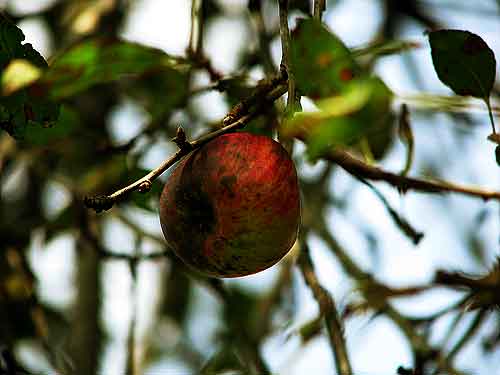 For each batch per this recipe, you’ll need about four pounds (maybe 16 medium) apples (or more if your apples are small, like the ones off the old apple tree). 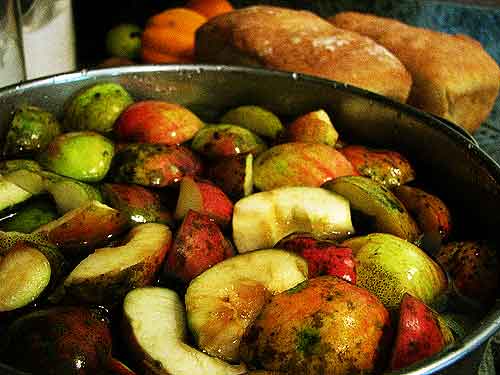 Cut, peel (if you must, see note), and core them. Place in a large pot; bring to a boil and simmer until soft but not liquified. Puree using a food processor or food mill.

Note: I don’t peel them. I just cut, core, and cook. I use a food mill, and by the time the apples go through the food mill, the peel is pretty well strained out. (It’s so much easier not to peel!)

What you want to end up with is two quarts of apple pulp (per recipe batch).

Don’t know how to can? Learn how here. 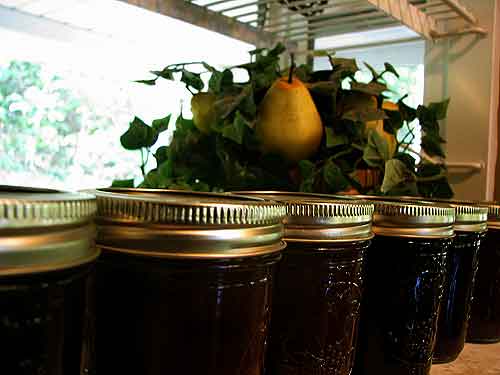 Printer-Friendly
How to make Apple Butter:

Combine apple pulp, sugar, and spices in a large pot. Simmer slowly until mixture thickens and rounds up on a spoon. (May take a couple of hours.) Stir frequently. Ladle hot butter into jars, leaving 1/4-inch headspace. Put on lids and bands. Process in a hot water bath for ten minutes. For me, this makes about five and a half jars (half-pint size). You can double, triple, etc, the recipe to make as much as you want. Your house will smell great while it’s cooking!

And oh my, this is good. Yet I had to play with the recipe anyway. What’s good with apples? Raisins! How about a little rum? And I made the best apple butter in the history of apple butter. Don’t ask me for my research to back up this claim. I have none. I just know.

Per the 2-quarts apple butter in the above recipe, add 1 cup raisins when combining the apple and spices in the pot to begin simmering. Toward the end of the simmering time, as the mixture is thickening, add 1/2 cup rum. (Don’t add the rum earlier as you don’t want all the good rum flavor to boil away!) Simmer a little while longer until mixture is thick and ready for canning, and can as per the previous instructions.

Spread it on some toasted Grandmother Bread and it’s just outrageous. 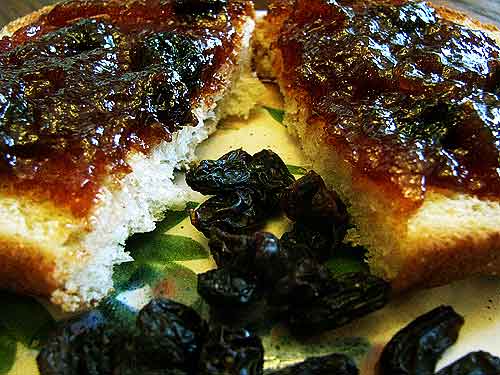 And then, as if this isn’t enough goodness, I made coffee cake. With apple butter. YUM. This recipe is similar to biscuit twists, except instead of separating the dough into twists, you bake it all together and slice it. And it’s so easy!!

Cut cream cheese and butter into baking mix plus the one tablespoon of added sugar using a pastry cutter. (If you don’t want this to be as sweet, leave the extra sugar out. Depends on your sweet tooth!) Add milk. Mixture may seem a little dry; knead with your hands to work in remaining dry ingredients and form a soft ball. (If your mixture is too wet, add a little more flour, but it should be just right now.) Roll out on floured waxed paper, sprinkling flour on top, too, into an approximately 12×8 rectangle. Transfer dough to a greased cookie sheet. Make two and a half inch cuts all along the long sides. Spread most of a half-pint jar of apple butter down the center. Criss-cross cut strips of dough over the top and pinch ends to seal. Bake in a 375-degree oven for 25 minutes or till nicely browned on top. Drizzle with powdered sugar icing. 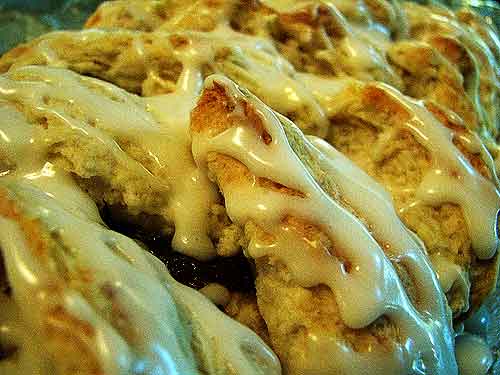