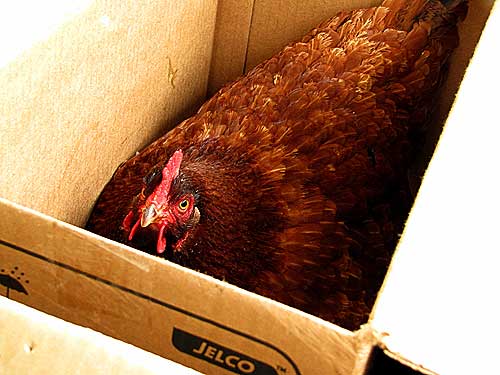 1. The hens are LAYING. In this box on the back porch. I have a plan, but need some better weather to execute it. The box will move with the plan. They like it. (And a few more smallish boxes. They’re cardboard, won’t last forever, but this entire plan has a makeshift air to it–until I can get a chicken house built.)

2. Buttercup, who is 13 years old, my oldest cat, who has moved with me four times, has almost forgiven me for Maude. But not quite.

3. I’m going to try to get hold of my superboys later today to schedule some fencing. March is around the corner and I’m running out of round bales. Fence it and spring will come, right? I have to spend some money somewhere–getting the fencing done, or more square bales. I think I’ve got enough square bales left to make it if I have the fencing prepared so they can MOVE as soon as the grass starts growing. This has been a mild winter. I’m going to get the fencing done and believe. (The fencing work needs done anyway, so I might as well place my bets there.)

4. I have no new news about Coco (other than that she continues to be fine).

5. Since I started talking about a field companion for Coco, I’ve had so many emails about LGD pups from readers who breed, wanting to gift Coco with a companion. Did you know Great Pyrs can have up to 12 in a litter? (That’s like giving birth to an entire sports team.) I’m going to see a puppy today, which most likely means I’m coming home with a puppy.