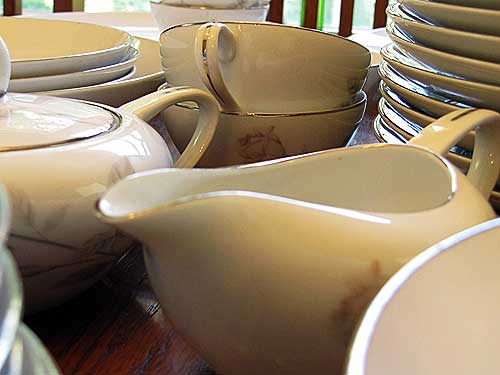 Since I posted photos of my grandmother’s dishes in the August CITR newsletter and in this post here, I’ve gotten a lot of questions about the pattern. It’s called French Rose 1264. It’s a vintage china that was imported from Japan. 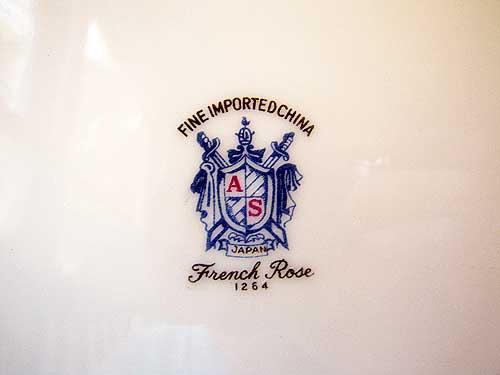 I’ve tried researching it and have come up with very little information. I can’t find what years it was produced and sold, though I have found places that list replacement pieces. 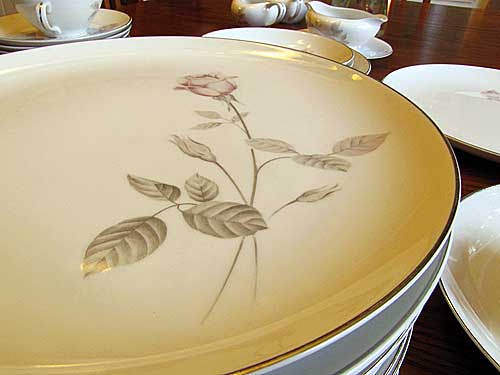 The pattern is in delicate shades of pink and gray with a platinum edging. I think it’s beautiful now, though I haven’t always thought that much of it.

I can remember eating on these dishes at my grandmother’s little house in Oklahoma. My grandmother was a frugal farm woman and she didn’t have a lot of excess. This was her fine china for holidays and special occasions. It’s an extensive set, including an assortment of serving dishes and variously-sized plates in somewhat incomprehensibly changing numbers. There are 18 tea cups and saucers, and 18 dinner plates, but 12 of most other pieces.

Some pieces are hard to decipher–we don’t eat on fine china as a society so much anymore and I don’t even know what some of these pieces are for. I think these must be little side dish plates. (See below, the small, shallow bowls in the foreground. They’re too shallow for soup.) 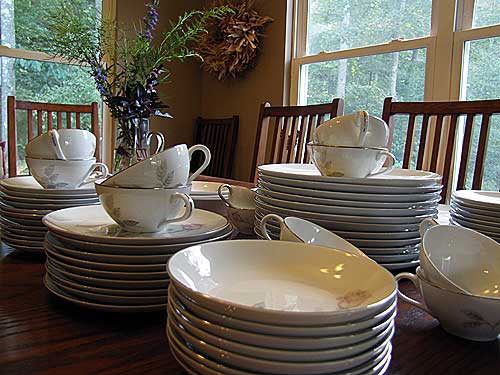 There are other plates in a small size and a medium size. Maybe one is a dessert plate and one is a luncheon plate. Or perhaps a salad plate.

The serving bowls are wide and shallow, but they hold more than you’d think, as I found when I served dinner on these dishes after our outdoor labor party this weekend. 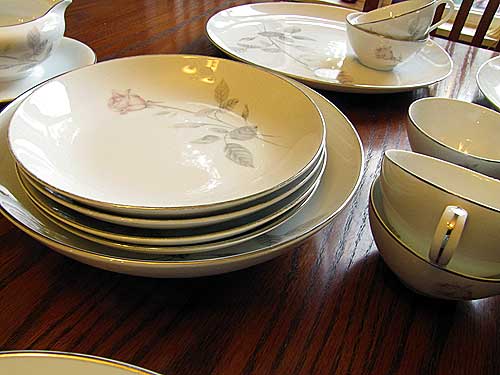 That was the first time these dishes have been used in who knows when. I’ve had these dishes for about 15 years. My mother gave them to me after my grandmother died. My mother’s tastes ran toward the more formal and fancy, and she didn’t want to use them even though she was sentimentally attached to them. To be honest, I didn’t really like them that much myself, but I took them because I thought my mother wanted me to take them. I put them away in a cupboard and never used them.

Then I moved, and put them away in a new cupboard. 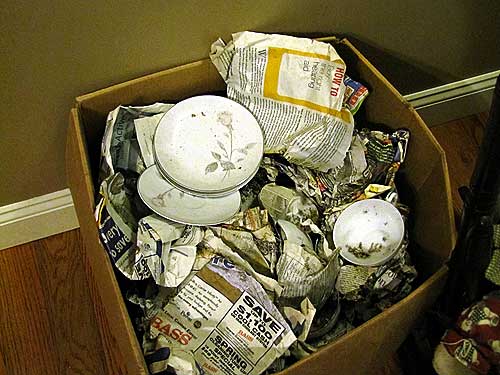 I know. Could I deserve these dishes less?

Recently, as I started working on minimizing and purging in my house, I thought about the dishes some more. I brought the box inside and decided I would wash the dishes and put them away. In fact, I had an urge to use the dishes. I’m not a “china person” in a lot of ways. China always feel too formal to me, but this china has a softer, gentler feel to it than most china. The pattern is quiet and minimal, inviting rather than imposing. My grandmother lived a simple life in a simple home. It fits that her china was also simple.

I’m not sure what sparked this new and intense interest in dishes that I have neglected for 15 years, but it’s probably a combination of factors including my own growth and appreciation for the old over the new combined with my mother’s recent passing, and the sense of how life rolls along and the connections to the past change and fade. To the day my mother died, she called my grandmother “Mama”–I will never hear someone speak of my grandmother again and call her Mama. I knew and remember my grandmother, but my children don’t. Morgan wasn’t even born when my grandmother died.

I need to serve my children meals on “Mama’s dishes.”

However, I had no place to put the dishes. I used to love the TV show Clean Sweep and I think about the host’s lectures quite often–he was always telling people that you don’t need a hundred things to remember someone by, you just need a few special things, the most special things of all, and in order to honor those special things and the memories that come with them, GET RID OF THE JUNK. The junk dishonors those things that are truly special, devouring them in clutter. This is so true, and with this in mind, I went after my china cabinet. It was filled with quite a bit of junk. The top cabinets hold what is, without doubt, special–my mother’s own china that Morgan chose for herself to inherit someday. (I’m not a huge fan of that china, as I’ve written about before-it feels too fancy and formal to me–but Morgan loves it, so I consider myself the conduit to give that china to Morgan. If you’re interested, you can see my mother’s china here.) My mother’s silver tea set is on the counter of that cabinet, and then in the closed cabinets below is all this junk. Various pieces and parts that I picked up here and there or were given to me. There, in those cabinets, is where I could put my grandmother’s china. If I got rid of the junk.

By the way, I’ve created a sub-section in my Crafts archives for Vintage Style & Minimal Living to file my posts on purging and decluttering, among other posts about keeping an old-fashioned home, style-wise. This section of my blog was originally titled Primitive Crafts & Country Style, and my intention for this section included posts both about crafts as well as old-fashioned, vintage home style. I think vintage style and minimal living go together perfectly–after all, our ancestors didn’t have homes full of junk! They didn’t have it, couldn’t afford it, or just plain knew better. Living frugally and simply is about more than saving money. It’s a lifestyle that permeates your entire home. Anyway, Primitive Crafts & Country Style was too long for the menu bar. Or the archive button. So it got shortened to just Crafts, but don’t be surprised when I post here about various other aspects of keeping the home. Just wanted to make a note of that here, especially to those of you who are new to my site.

Back to the dishes–I unloaded those lower cabinets, spreading it all out on the floor then the dining room table. Morgan came by and went over the pieces with me. She thought the cat cookie jar with a mouse on top (as the handle) was adorable. I said, “Yes, it’s very cute, but who uses a cookie jar?” I’ve had this cookie jar for about 25 years and I can’t remember the last time it saw a cookie. I wouldn’t put a cookie in there unless I wanted to hide it. I put cookies, brownies, and other goodies in a glass cake stand where the kids can easily find treats. That’s how I live, and a cookie jar just doesn’t fit in. 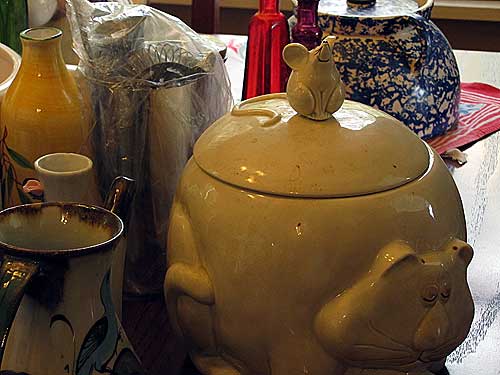 It’s a really cute cookie jar, and there were various other somewhat cute, and not so cute, pieces. I compared each item to my grandmother’s dishes. Did I love it enough to make room for it by my grandmother’s dishes, or did I love my grandmother’s dishes more and could get rid of it to make more room for them? I also wondered, of course, if this or that might be something I don’t care for now but might love in 15 years?! (The answer to that question can usually be found in whether or not there are any special memories associated with the piece. I have no special memories associated with that cookie jar, for example. I bought it myself, because it was cute, then never could figure out what to do with it since I don’t like using a cookie jar.)

I boxed up all sorts of various items to give away and cleared out that cabinet enough to make room for my grandmother’s dishes. I got out that box where chickens had laid eggs on “Mama’s dishes” and I unwrapped the dishes one by one from newspaper that was shredded in places, probably because mice had been in the box. 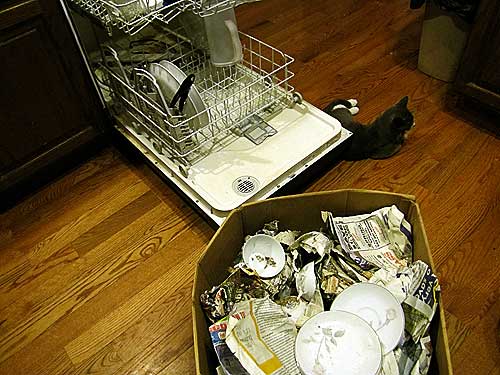 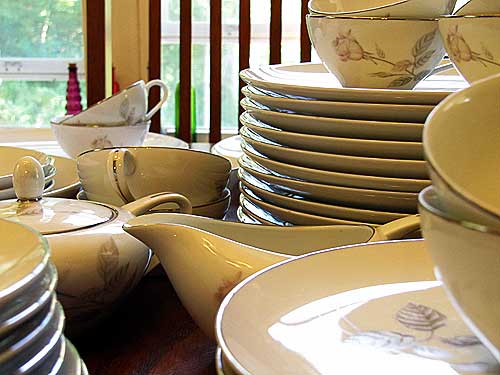 And now I’m serving meals to my children…. 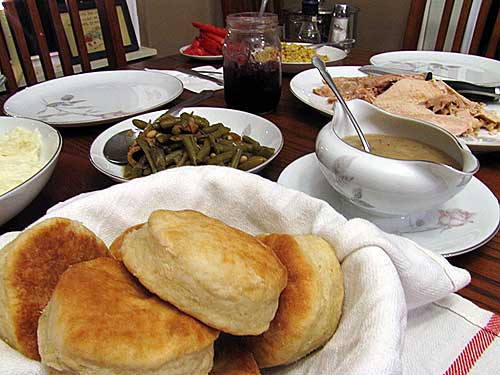 ….on “Mama’s dishes.” And it feels pretty good.