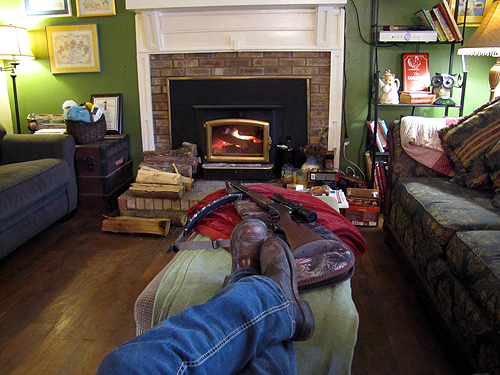 First of all, I need to apologize because I took vacation without saying I was taking vacation. That was because I was so into my vacation.

However! I’m back and with excitement.

This Monday started the two-week buck season here. We have had a non-stop problem with poachers here since we moved in. Yesterday, it came to a head and we were able to catch one of the poachers in the act. 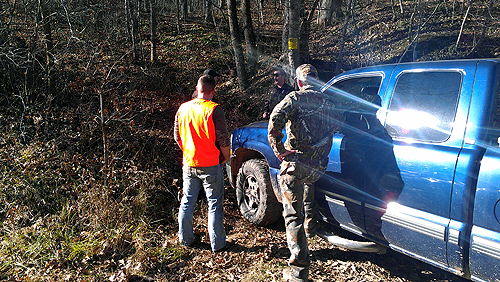 This is Ross (orange hunting vest) and my neighbor Jim, standing by the blue pickup, with two game wardens in the background.

On Tuesday afternoon, we spied a truck and two four-wheelers pull up on a road up the hill across from our farm. This is property that is also part of this farm and we have seen poachers pull deer down the hill and load them in the past. This time, the four-wheelers went up, then came back down, then left with the truck. Ross took his four-wheeler and went up the hill, found another pickup truck but no one there. We were sure we had a poacher. Ross parked his four-wheeler at the bottom of the hill. I called game wardens and my neighbor Jim. My neighbor Jim came to help block the road with his pickup. That was the only way out from the top of the hill. I was worried about Ross confronting them alone. Luckily, game wardens arrived before there was a confrontation. 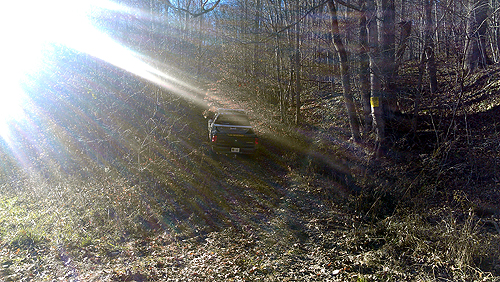 This is the game wardens driving up the hill. Ross went up after them with his four-wheeler. My neighbor Jim went with him, and Ross’s dad also went up once he got back. (He was at the store when this was going down.)

The poacher was caught red-handed with a shot deer. He was charged with trespassing, illegal possession of wildlife, no hunting license, and a vehicle registration two years out of date.

He admitted to everything, said he’d been planning to stay all day, shoot all the deer he could, and that was his family coming to check on him–who we spotted and gave him away. He said he had 160 acres of his own, but hadn’t gotten a deer on his land so he decided to come hunt ours.

And I bet this farm is off his to-poach list now!