Between yesterday and today, I have made a decision. That may seem fast, but in truth this decision process started in April when Patriot bucked Morgan. There was a trainer here that day, a trainer that lives nearby and is retired from training. As soon as we knew that Morgan was okay, he turned to me and made no bones when he said, “Get rid of that horse.”

At the time, that statement seemed harsh. In fact, I just stared at him, overwhelmed, and burst into tears. I don’t bring an animal to my farm without making a commitment to them. Being new to horses, I didn’t know what to do, or what to think. I turned to the rescue, who helped me find a trainer who was open and willing to work with rescue horses, and we decided to adopt Zip. We had looked at Zip the same day we first looked at Patriot, but Zip had injured her leg getting out of the trailer that day and Morgan wasn’t able to test ride her. Maybe if she had ridden Zip that day, we would have taken Zip home to begin with and this never would have happened, but I doubt it. She fell in instant love with Patriot.

Having been told that Zip had more training and riding behind her than Patriot, we ended up sending Zip first to the trainer in order to get Morgan on a horse she could ride more quickly. Zip was like turning a page in a book, the trainer said. Every day, he discovered something she already knew how to do. She does, indeed, have a lot of good training in her background and she was quickly reminded of it and is the good riding horse we wanted her to be. And yet if you asked Morgan, she would tell you, “I like Zip, but I love Patriot.”

When Zip came home, we sent Patriot. I didn’t send Patriot with the expectation that we would bring home a horse immediately ready to ride, just like Zip. I sent him with the anticipation of a solid assessment and a training start that could lead to him being a good riding horse in time. Patriot wasn’t beginning at the same place Zip had begun, but I hoped to tap into his potential by infusing some fundamentals. An experienced trainer had turned on a dime and said, “Get rid of that horse,” in the same way that I might say without a second’s blink, “Throw out that jar,” if a brand new canner showed me some chicken they’d water-bathed instead of pressure-canned and the lid was coming up. I’d have the experience to say that about a jar of preserved food, but I know nothing about horses. The trainer that made that statement does, though–but I wasn’t ready to accept it. (I’ve had people argue with me about their jars of chicken, too.) I wanted a second opinion.

The first trainer, sight unseen, had also told me not to get Zip. Zip turned out to be an absolute jewel of a riding horse. (In fairness to the first trainer, he was concerned about our safety as new horse owners, and didn’t want us to make a second mistake.) I knew we needed to find a trainer with an open mind to rescue horses–because there are jewels like Zip out there. We already had Patriot, and I wasn’t ready to give up on him. By sending Patriot to training, we learned a lot about him. He has no training in his background. I asked Mike if Patriot knew English reining or Western reining. He said, “He knows no reining.” Patriot appears to be a 10-year-old greenbroke horse. Early on, he told me that he thought something was wrong with Patriot, but he couldn’t put his finger on it. He continued to work with Patriot every day, and made progress in his ground manners and eventually started riding him daily. At this point, I started feeling hopeful. The sense that something was wrong with Patriot never left Mike, though, and it all became clear the other day when Patriot bucked him. By this time, he’d been riding and working Patriot every day for several weeks. Patriot has an old, ugly scar on one of his back legs. After Patriot bucked, he was given a long workout. When a horse misbehaves that way, he has to be immersed immediately in respect training. (Luckily the trainer was actually able to get up off the ground and start working him.) Patriot’s leg, where that old scar is, swelled and the non-pliable skin at the scar split open.

Suddenly a lot of things made sense. Patriot’s unusual clumsiness. The way he holds his ears back too often to be normal. Not to mention so many random, bizarre behaviors–rearing up and busting out a light, throwing himself down in cross ties, and so on. It’s quite possible this old injury never healed properly and/or that he has long-term damage. This doesn’t excuse bucking in a horse, but may at least partially explain it and other behaviors. He may be in pain. The lack of soundness in that leg was “hidden” until he was ridden and worked regularly. (This is not something that would have surfaced during rescue care conditions.) It also doesn’t change the fact that he is at most greenbroke, and at 10, he has a solid set of bad habits. To overcome those bad habits and behaviors, he would need to be worked and ridden regularly in long-term training. Because of the lack of soundness in his leg, he can’t be worked and ridden regularly in long-term training. Whether or not something can be done about his leg, I don’t know, a vet would have to say, but it’s a very old injury and it’s probably too late or too expensive to address other than to allow him to virtually put his feet up. He is, indeed, most fit for pasture ornamentation. And he should not be a pasture ornament where any of his bad habits at any given time could harm someone. He sometimes suddenly lunges or kicks–randomly, in the field, around people. My farm is often open to the public, operates somewhat like a petting zoo, and is a magnet for children. Not only is Patriot a horse we can’t ride, he is a powerful and unpredictable large animal.

I found out what I wanted to find out from sending him to training–the conclusion wasn’t the one for which I hoped, but I did get the conclusion. Mike recommended that this was not the horse for us, and I had to have a hard conversation with Morgan and fight past my own emotional attachment to Patriot. I want to thank trainer Mike Trader for getting on Patriot’s back so many times–because there are a lot of people, even trainers, who would not have done that. (He might be slightly crazy for it, but he’s a really nice guy and also very diligent in pursuing a conclusion for his clients. If you’re looking for a horse trainer, I highly recommend him, and fortunately, he survived Patriot, so he’s still available.)

I also want to say a word about the Heart of Phoenix Equine Rescue here–someone questioned in the comments yesterday if we were “stuck” with Patriot. Absolutely not. The horse rescue has been here for us this entire time. The vast majority of rescue stories go the way of Zip–a jewel plucked from neglect with a storybook ending. Rescues generally have little or no knowledge of an animal’s background, and they are upfront about that. If something goes wrong, they will take the animal back. They have offered to take Patriot back from the day he bucked Morgan. It was me who took so long to make the decision. HOP has been by my side to support me as an adopter all the way, and if you adopt a horse from them, you will find the same.

Today, HOP is going to pull up at Mike Trader’s barn and load Patriot into their trailer. He will not be returning to Sassafras Farm. 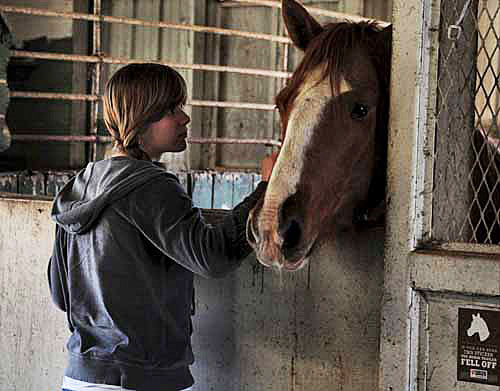 P.S. HOP will also, at the same time, be delivering the little shortcake to Mike’s barn. There are a few days yet left on Patriot’s clock with the trainer and they will be used to evaluate her potential as a more safe and suitable fit for our farm.