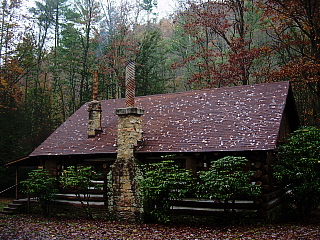 The cabin was so cute. It has no electricity or running water. You’re supposed to commune with nature. You know what I thought was even weirder than the outhouse? The sign at the front of the park that said, “Forest closed from 10 pm to 6 am.”

Okay, seriously, can you close a forest? Isn’t that like closing the sky? The river? The air??? I can just see the squirrels clocking out…. “It’s 10 pm. Time to go home.”

Seneca State Forest is one of West Virginia’s oldest forests, and it really is beautiful there–everywhere, not just in the state park but in the entire area. The scenery was just gorgeous. 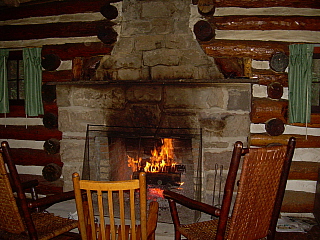 Playing with fire is fun, and it made me wish my kids were there because they love throwing logs on a fire and sitting in front of it. We were lucky this weekend because it wasn’t really that cold. There were no fireplaces in the bedrooms, so if it had been any colder, I’m thinking that would have been hard. There were gas lamps for light, but I still wished I’d brought more candles.

The firewood was chopped and came with the cabin rental, by the way. And, there were coin-operated showers at the park headquarters and regular restrooms, so civilization was within reach. 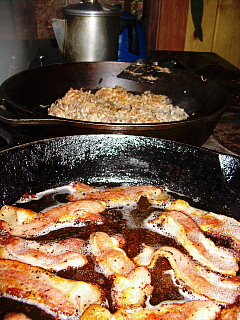 Cooking on the woodstove was fun!!!

I baked bread twice, regular loaf bread and french bread. I managed to get the bread baked right, but I was surprised by how much more it browned and how quickly it baked. I don’t really time bread-baking, I just do it by feel and how the bread looks in the oven, so this was a different experience. We’ve thought about putting a woodstove in our new house, one we can cook on, so maybe I’ll get a chance to learn more. 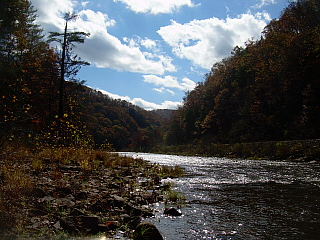 The cabin backed up to the beautiful Greenbrier River.

Also in the park is a very pretty, small lake with rowboats and canoes. I really wanted to go out on the lake, but we didn’t have time because instead we took a daytrip on Saturday out to…. 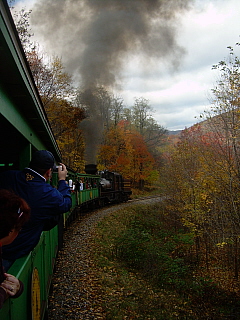 Cass Scenic Railroad, an old logging railroad that has been turned into a scenic rail trip where you can ride the steam-driven locomotive up to Bald Knob, the second highest peak in West Virginia. 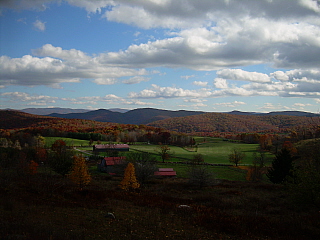 And for your trouble, you get sprawling views like this one over the autumn mountains of Pocahontas County.

Could you go for a weekend with no electricity? Longer? A week? I kept thinking, I’d just like some running water and the internet. I need one plug, for my computer. But we humans are such gluttons for convenience. Could I really stick to one plug? I have to say that I don’t think so.